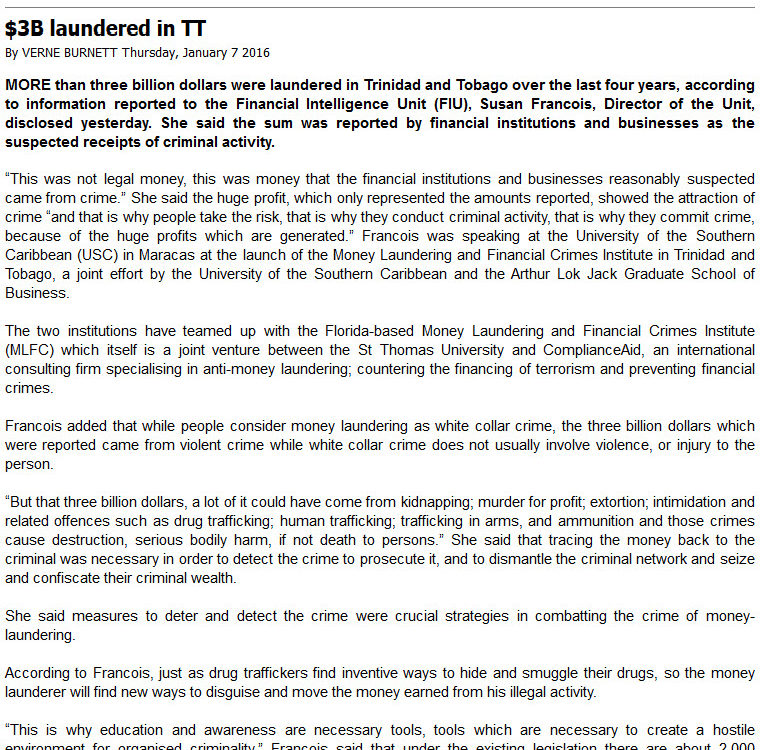 $3 Billion Laundered in Trinidad and Tobago

MORE than three billion dollars were laundered in Trinidad and Tobago over the last four years, according to information reported to the Financial Intelligence Unit (FIU), Susan Francois, Director of the Unit, disclosed yesterday. She said the sum was reported by financial institutions and businesses as the suspected receipts of criminal activity.

“This was not legal money, this was money that the financial institutions and businesses reasonably suspected came from crime.” She said the huge profit, which only represented the amounts reported, showed the attraction of crime “and that is why people take the risk, that is why they conduct criminal activity, that is why they commit crime, because of the huge profits which are generated.” Francois was speaking at the University of the Southern Caribbean (USC) in Maracas at the launch of the Money Laundering and Financial Crimes Institute in Trinidad and Tobago, a joint effort by the University of the Southern Caribbean and the Arthur Lok Jack Graduate School of Business.

The two institutions have teamed up with the Florida-based Money Laundering and Financial Crimes Institute (MLFC) which itself is a joint venture between the St Thomas University and ComplianceAid, an international consulting firm specialising in anti-money laundering; countering the financing of terrorism and preventing financial crimes.

Continue at Trinidad and Tobago Newsday